Not very often these come along so we bought it right away.... 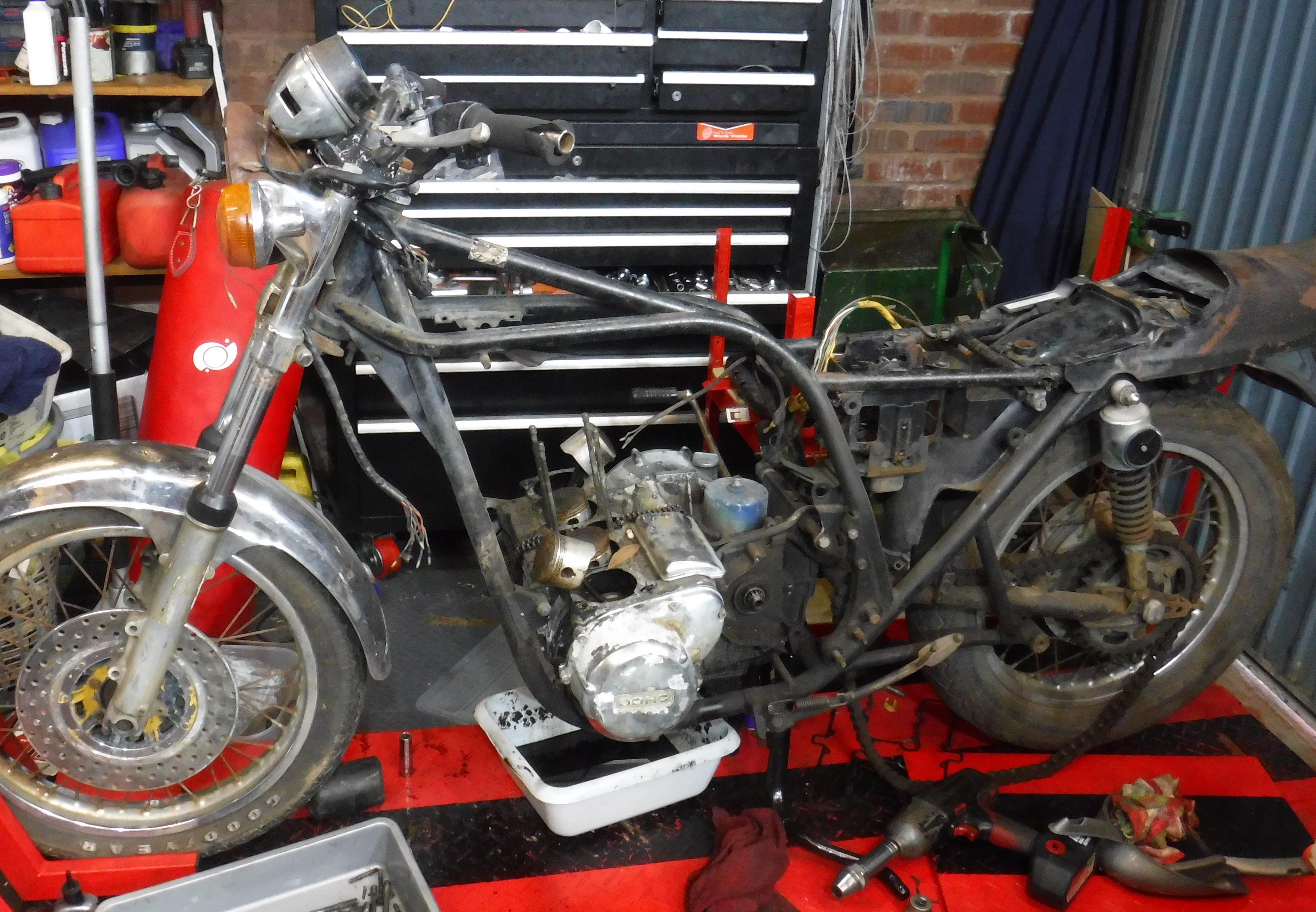 The engine and frame number match and it is relatively early (making it a "made in 1972") model.

Mostly complete but there a few odd rare parts missing which will give us a bit of a challenge.

You will notice the wrong forks fitted which we will have to replace with the original type. 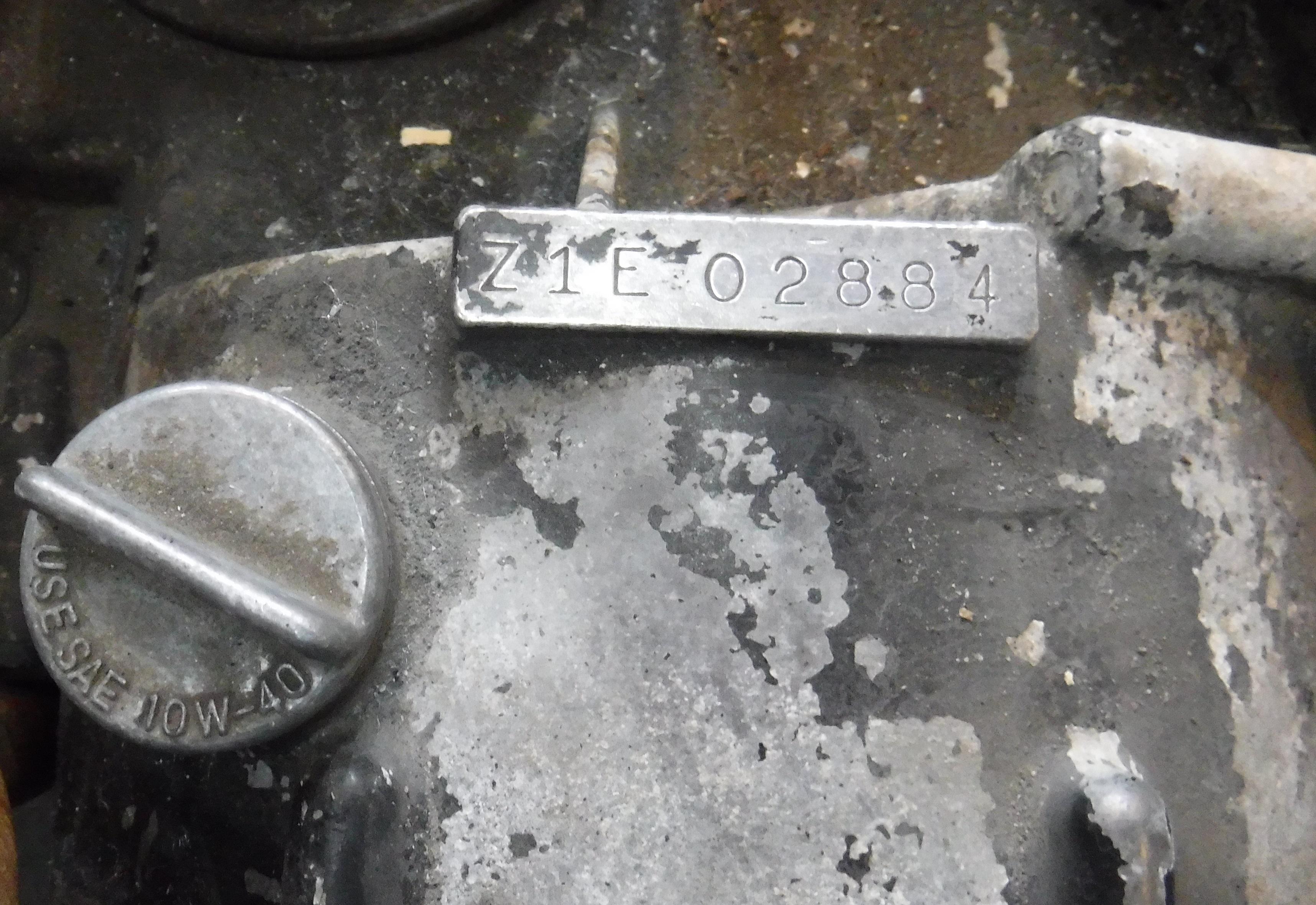 I have taken the head and barrels off to check that they are right and it still has the early ones with the one piece head gasket that are consistent with the early models.

And the head is lovely and clean.  You never know what you are going to get when you take these to bits. 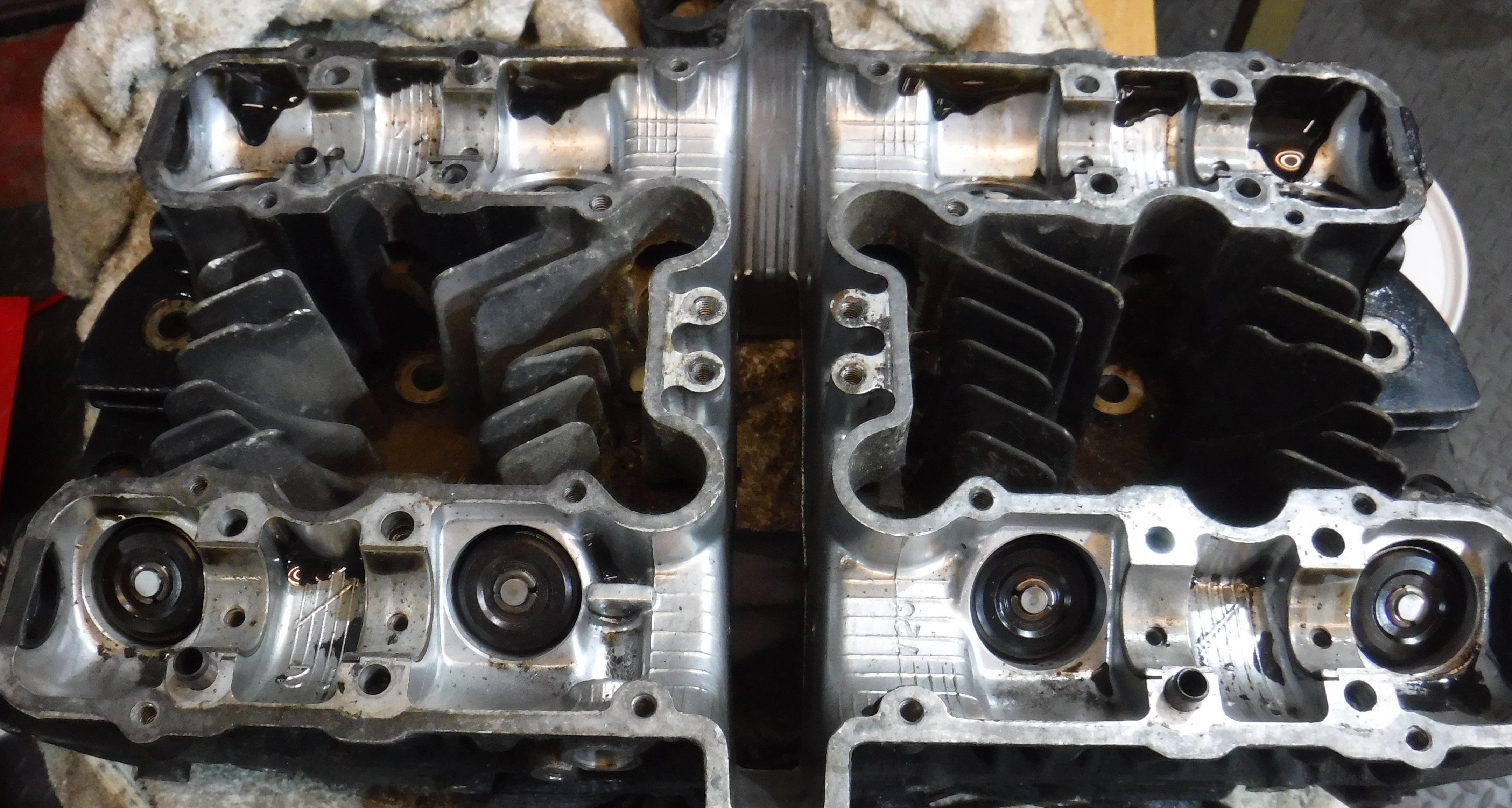 We will have to pay particular attention to this rebuild, it is imperative to use all the right early parts to make sure it is as original as possible. This is the only way of making sure it is worth the big money that people are paying for them. 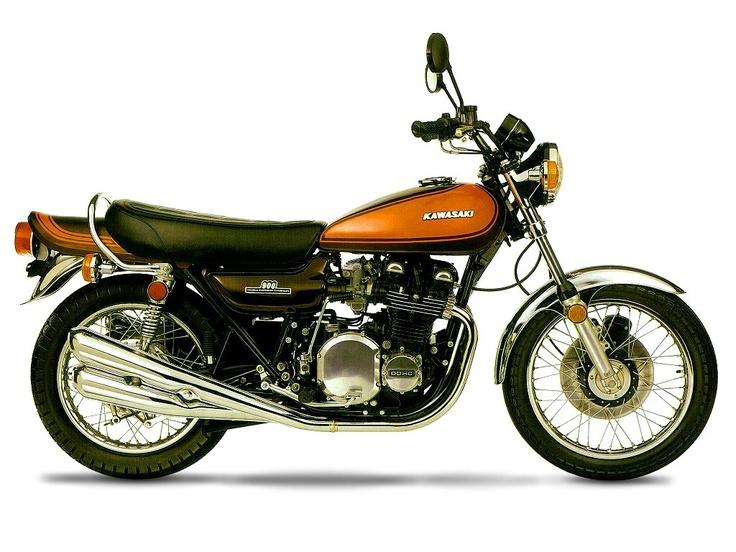 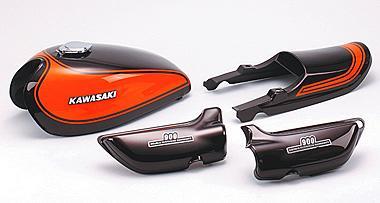 The frame has gone to Tony at PITSTOP motorcycles (01942 684684) for him to give it a once over, making sure all the threads are OK and touching up some of the poor welds. Once he finishes with it then it will be off to get checked for any twists and bends it may have gotten over the last 47 years.

The motor has been striped and taken to Steve Smethurst for a cleaning and polishing job. The main part of the motor will be black of course but we still have it deep cleaned by Steve.

A few odd bits have gone to the Chrome plater and Pete Brown as got all the Re-zincing parts.

Alistair Marshall has already done us a set of early 72 Z1 clocks with all the correct odd numerals.

Well the chrome plating has come back, We asked them NOT to polish out  the date code from the rear torque arm which luckily they did`nt.... 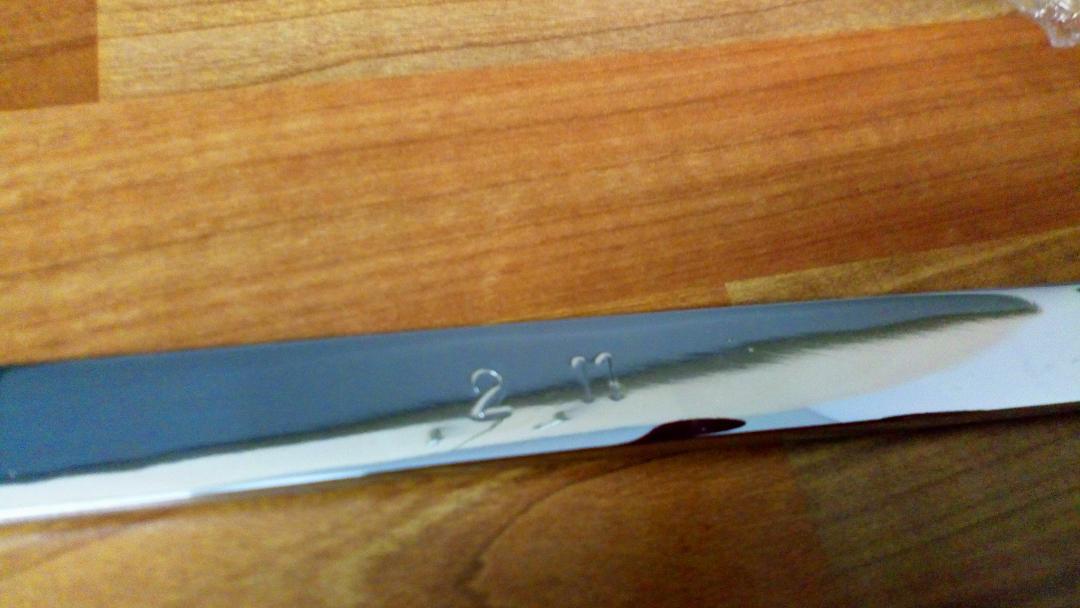 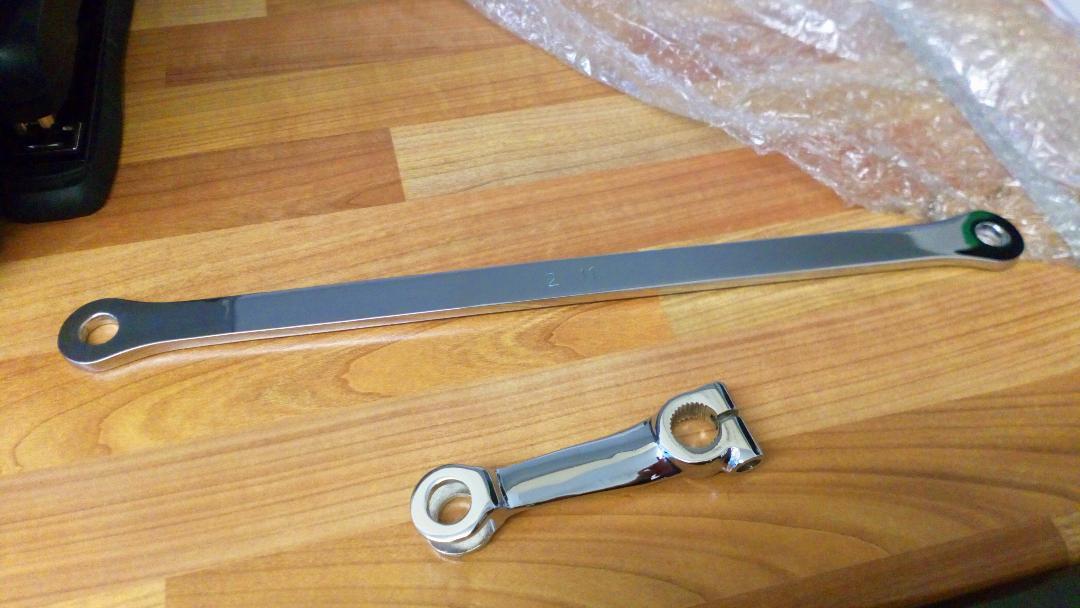 The Zinc plating also came back and Steve Smethurst returned us the engine components as well along with the rear hub and sprocket carrier. 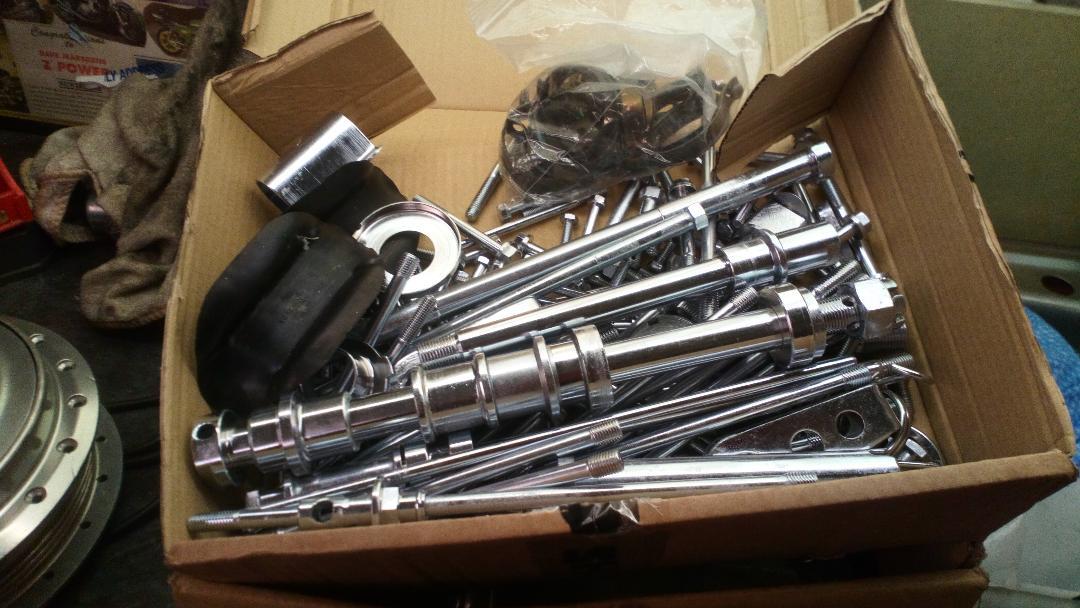 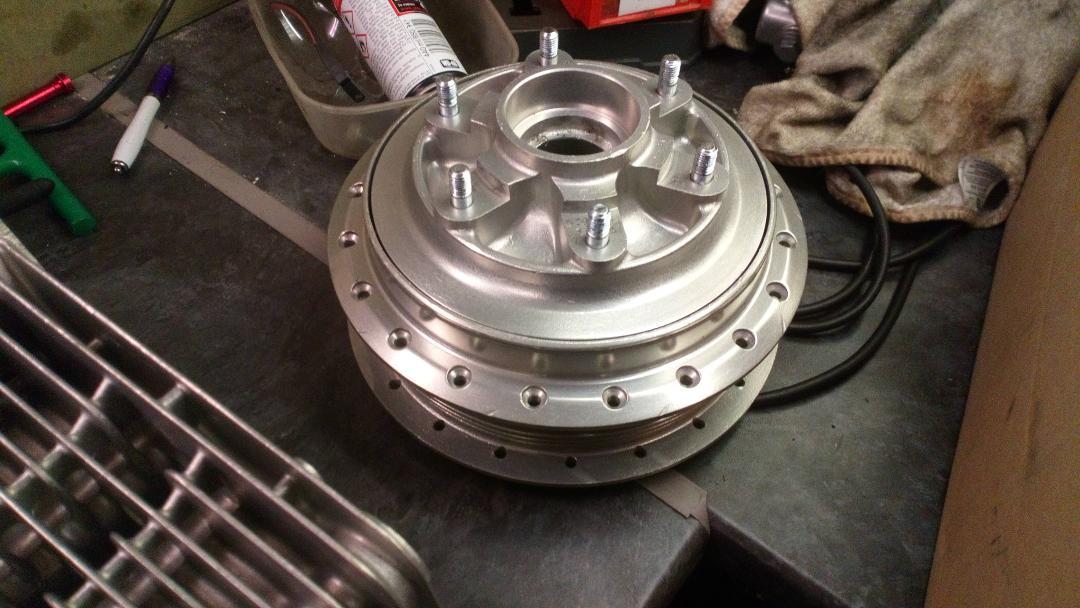 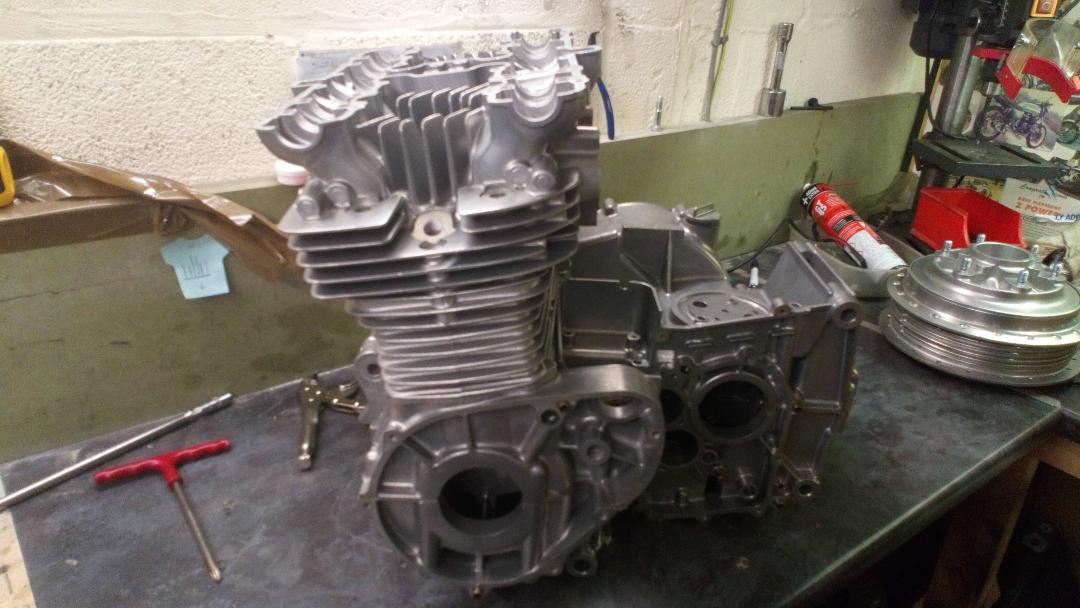 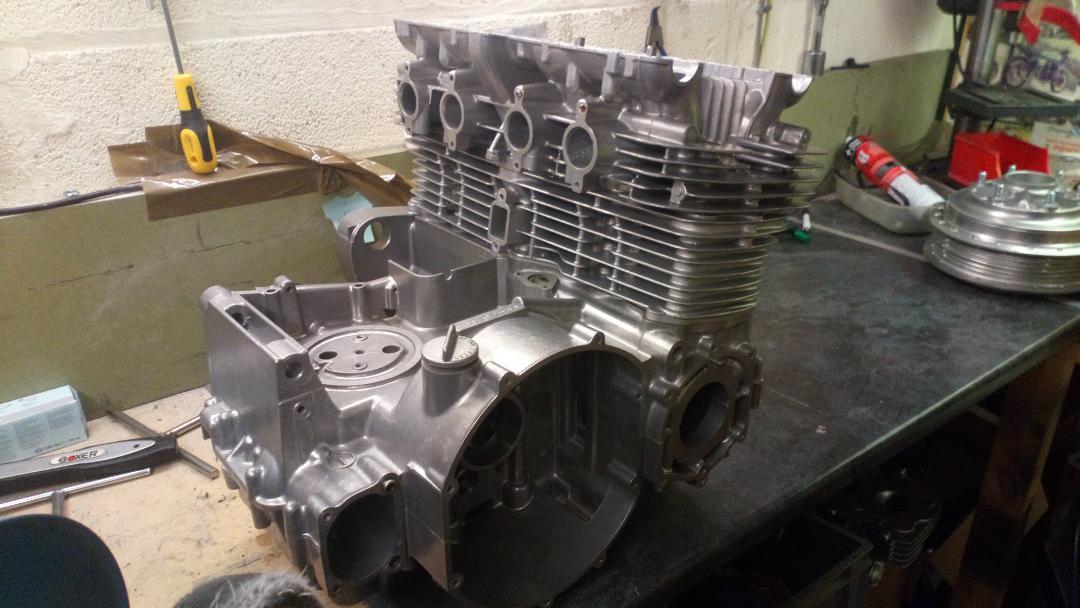 Just the polishing to pick up now..... We can now start to prepare the engine for the Satin black engine painting. There will be a lot of masking off to sort out first......

We got the polishing back from Steve Smethurst, all looks good.

The front wheel hub also came back from the powder coaters, so we fitted new bearings/seals/spacers to it and also to the rear hub.

The wheels rims with the correct date stamping also turned up from the platers, so i can get Pete Brown to rebuild the wheels now using new spokes and the gold coloured nipples.

The rims are stamped 2J,  which is October 1972, which is a month before the bike was built at Kawasaki, so this is correct, they are always a month or so before build date. 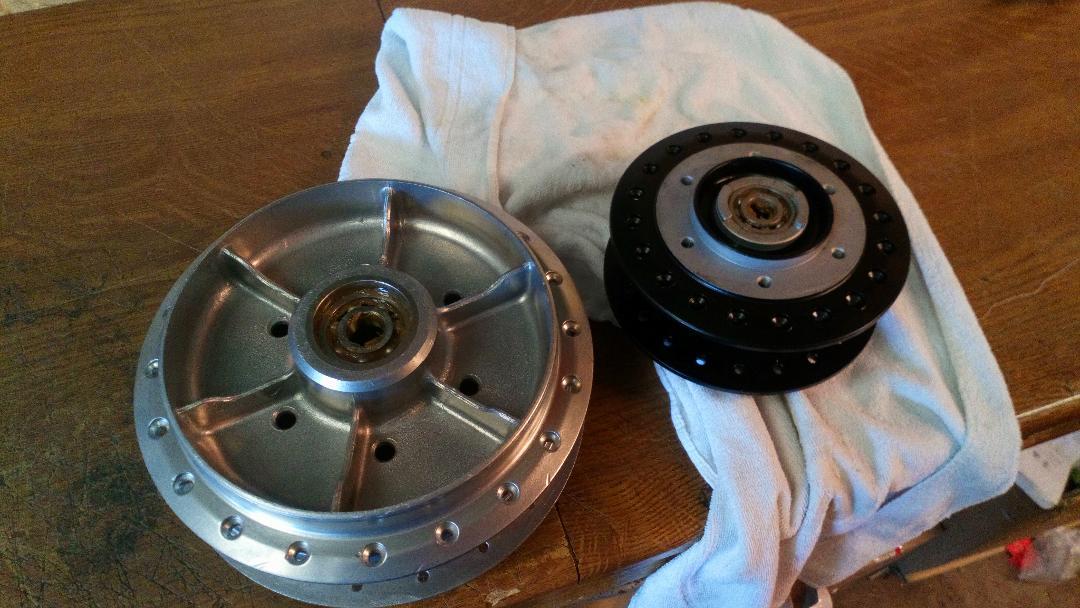 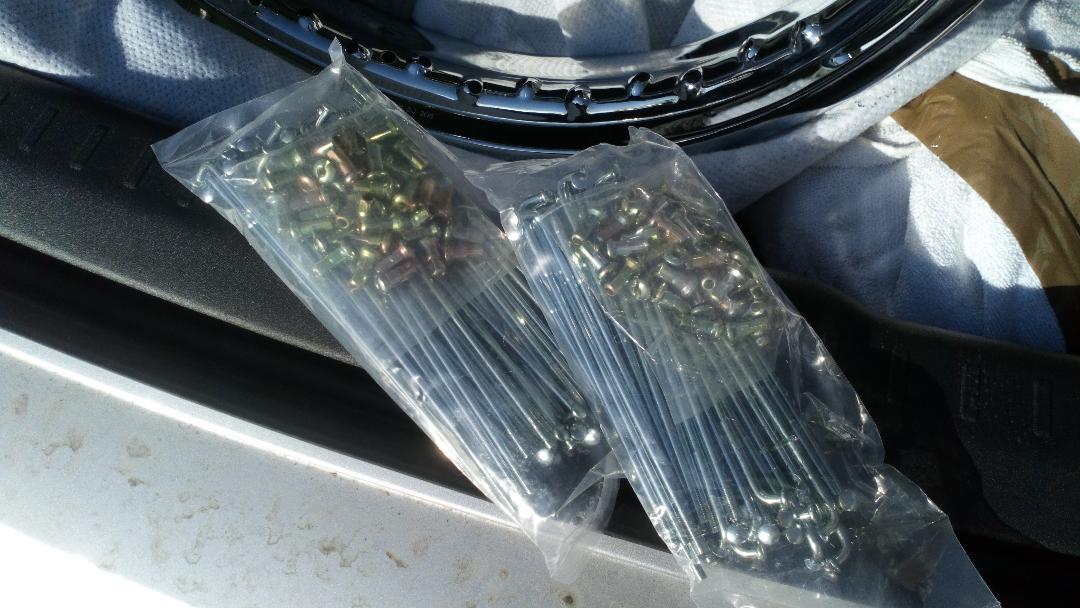 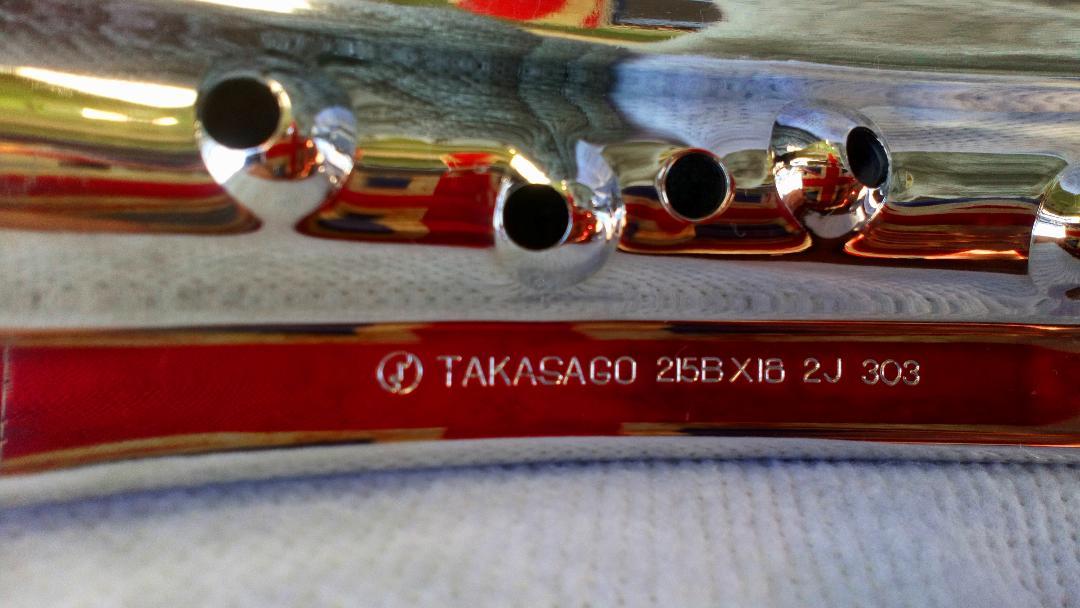 The wheels are back now from the wheel rebuilders and we have fitted a set of our Dunlop OE gold seal tyres. We also have painted most of the engine parts and have began assembling the bottom end of the motor. The sump plate is the early one of course with no baffle plate and the alternator cover is also the early type with the small flange running along the edge of it. The oil pump is the 3 screw strainer type.

You will also note the correct type "bent! kickstart. We bought this from a dealer in the USA, not cheap at over $300, it was new old stock but it still needed re-chroming to make it look like new again....

New bearings on the gearbox shafts and clutch were fitted along with new cam chain, oil seals, gaskets and tab washers. Many other new parts were fitted as we assembled the engine.

The Cylinder barrels are currently at Engine Tecknics being rebored along with the head which will be checked over for valve guide wear and valve seat refurbishing. 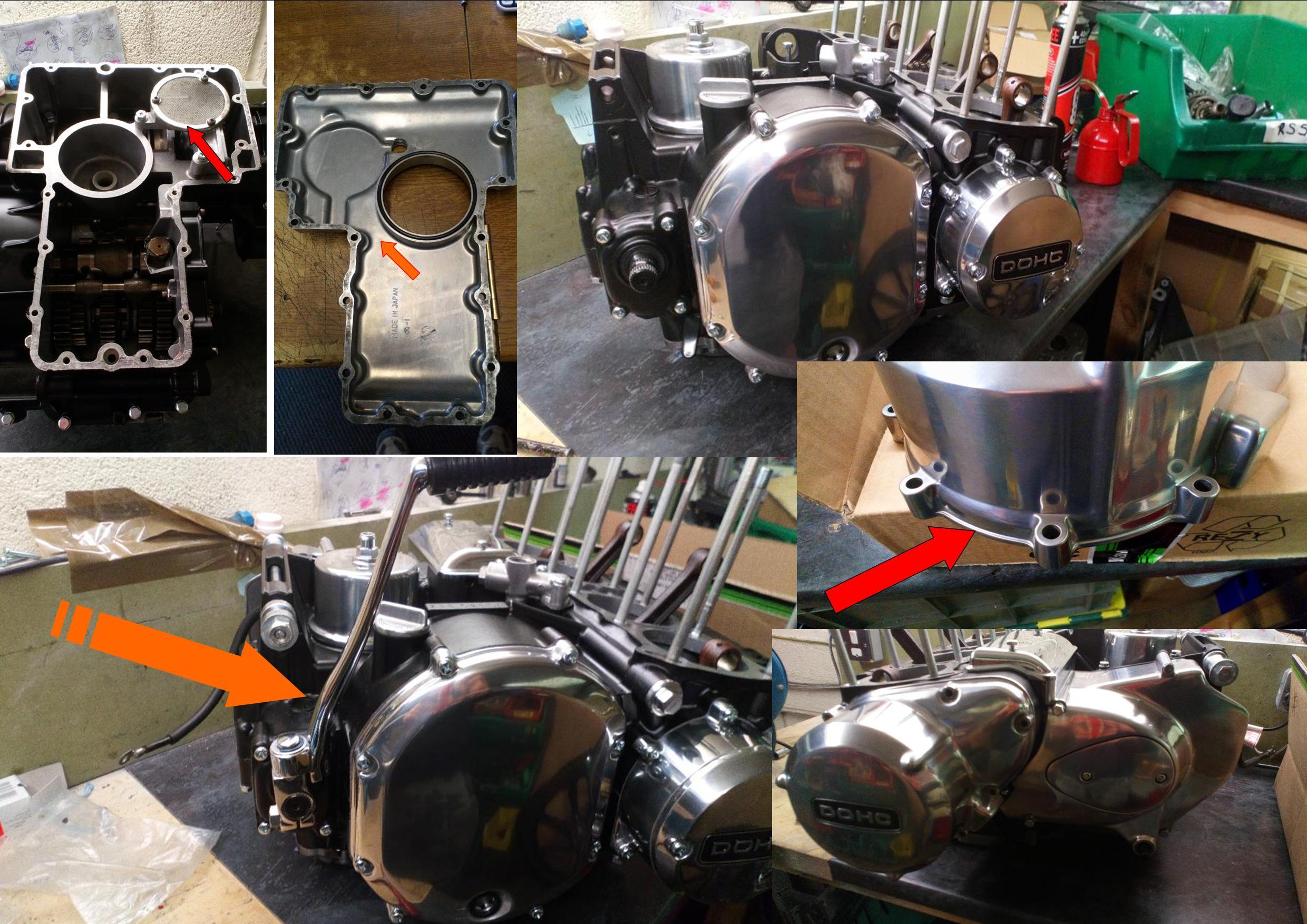 All new or re-zinced bolts were fitted along with a new set of 12 x  10MM cylinder studs.

Tony at Pitstop motorcycles finished the frame a few weeks ago so it has now gone to be jigged up to check how straight it is !....

We are almost ready now for the powder coating to be done.

Well the frame has been checked over, just needed a few tweaks here and there and has now gone off to the powder coaters with the rest of the black stuff. should be back very soon.

We also got the cylinders back and we have painted them and polished the edges of the outside fins.

Ready to fit to the crankcases now. 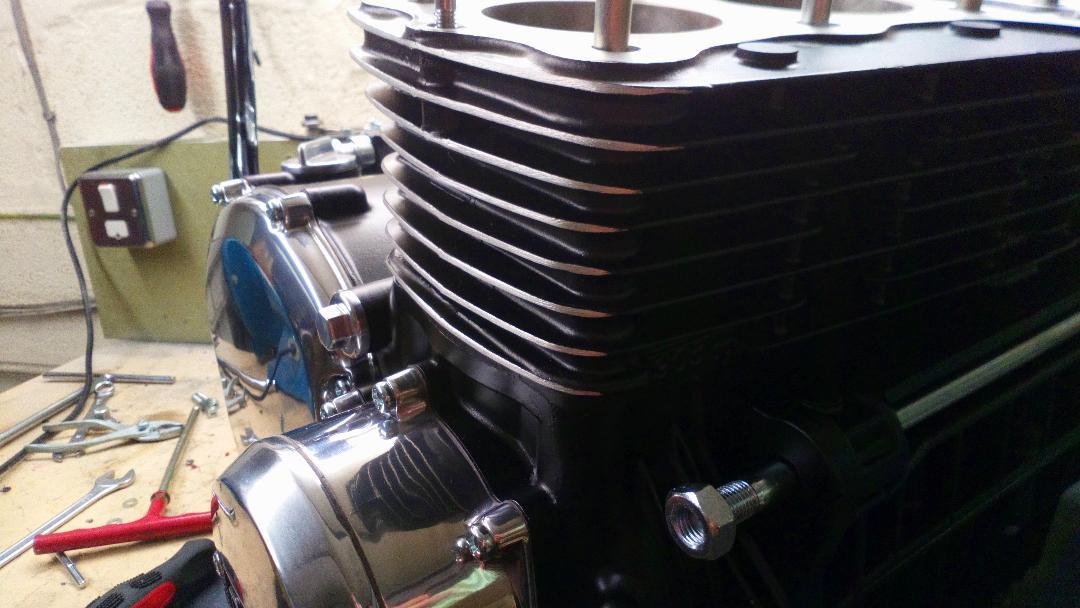 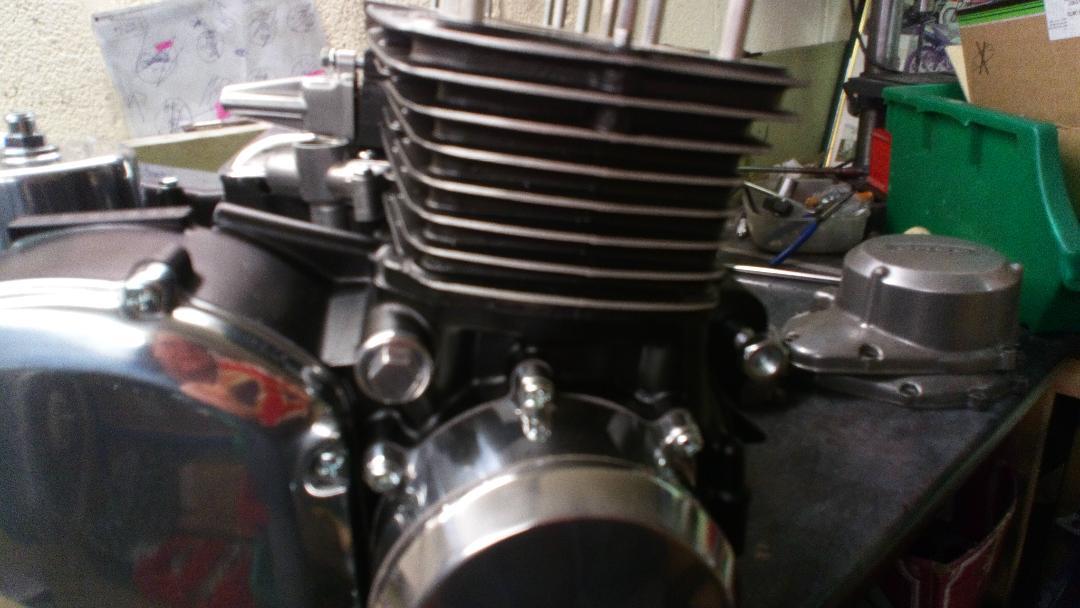 All looks good, just need to run a tap through all the threads now. 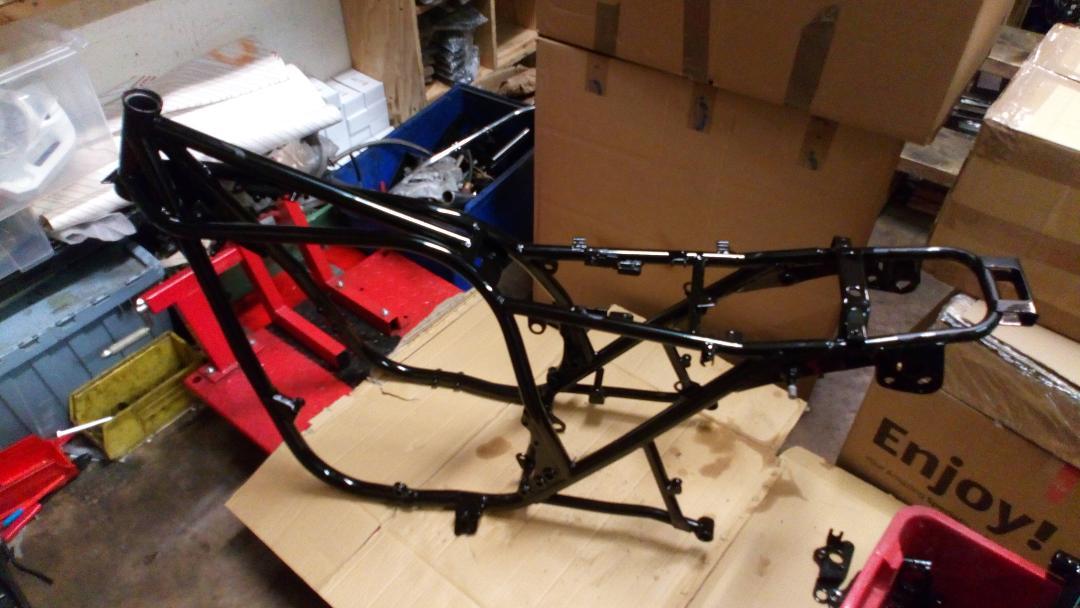 We fitted a new set of head bearings and fitted the bottom yoke. Note the correct "wrong" spelling of the wording on the frame ID decal. Kawasaki changed it on later models. 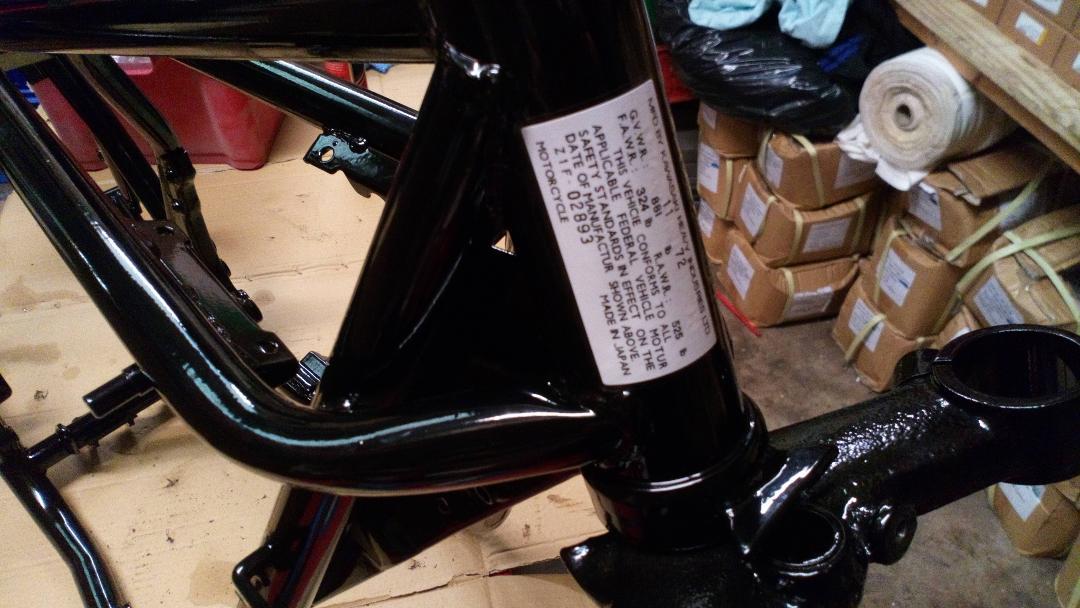